Antonio Violano has developed his work in Italy, Spain, France and United States

Antonio Violano, Florentine sculpture who currently resides in Barcelona. Tireless researcher, Violano’s historical expression’s roots are found in the Etruscan period. This deep knowledge of the first and most splendid Tuscany civilization has influenced him deeply as well as his treatment of compact volumes, over which the light neatly shines.
Violano is definitely a Tuscany artist, very complex and with a long trajectory, whose work fluctuates between the figurative style, from which it was born, and the modern abstract style, which he was influenced by during his stay in the USA, as from the vitality and unstructured nature of Barcelona’s el Born neighborhood, from which he continues working.

Because of his work and long investigative trajectory, l’Accademia delle Arti e del Disegno di Firenze gave him an honorific academic position in 2002 and in 2019 was named ordinary academic.

Since 1965 to 2019 he exposes in the United States, Portugal, Hungary, France, Germany, Italy and Spain.

Finally, In 2010, he participated in the 54th Biennale di Vanezia amongst other personalities in the architectural setting such as Benedetta Tagliabue, where he was awarded first prize for an artistic short film.

In November 2012 he participated in  Florencia ate the exhibition Arte e Sport promoted by  Regione Toscana.

In 2014 he partecipate in the tribute to Michelangelo  “Dall’idea al fare artistico. Omaggio a Michelangelo”- Accademia delle Arti e del Disegno of  Florence.

In 2017 exclusive exhibition “Antonio Violano” in Roma – at the Istituto Portugués de Sant’Antonio.

En 2019 started an expo. In the Hotel Estela –Hotel del Arte in Sitges with works of the artist like  Dalí, Chillida y Subirachs.

Since September 2019 part of his collection has been exposed at Madrid’s VITRA’s showroom and from this November also at Hotel ALMANAC Barcelona. 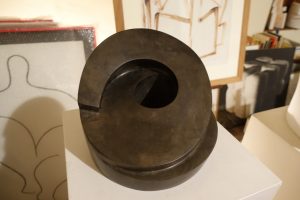